Adaptability of resistant hybrids to the pedoclimatic conditions of Piacenza area: assessment of the incidence and severity of downy mildew, powdery mildew, black-rot and botrytis

Action 4 of the ValorinVitis Project: results of the 2018 and 2019 growing seasons

The main objective of the Project's Action 4 is to evaluate the adaptability of  hybrids of last generation resistant to downy and powdery mildew to the pedoclimatic conditions of the Piacenza area. As part of this Action, a new collection of vine plants was established in Vicobarone, including the following new hybrids: SAUVIGNON RYTOS, SAUVIGNON KRETOS SORELI, CABERNET EIDOS, MERLOT CHORUS, UD 31-120 r, U.D- 72-096, U.D. 31-103 U.D. 30-080 B. and U.D. 80-100 B.

During the 2018 and the 2019 growing seasons, weekly monitoring was performed. During each monitoring, for each resistant hybrid and for the Ervi variety, used as a sensitive witness, were measured: 1) vegetative and reproductive phenological stage according to the BBCH scale; 2) incidence and severity (EPPO standard) of downy mildew, powdery mildew, black-rot and botrytis.

Overall, only erratic symptoms of powdery mildew were detected during field surveys during the two seasons. The downy mildew was also sporadic and with few lesions only on Ervi in 2018, while in the following season a greater and more widespread incidence was observed, although with rather limited overall severity on the different varieties under test. Despite the generally favourable weather conditions for the development of the pathogen in 2019, in fact, resistant varieties showed very few lesions. On the other hand, all varieties showed an incidence of black-rot of more than 10% on the leaves in both years, confirming that the management of this disease becomes a delicate and crucial point in the management of new resistant or tolerant varieties in the vineyard.

During the two-year period, leaves and portions of clusters were taken during flowering and when the berry was swollen, on which various components of resistance were evaluated in a controlled environment in order to obtain precise and detailed indications about the mechanisms of tolerance to diseases, in particular peronpsora and oidium, put in place by the new varieties under study. In particular, during these unicycle studies of infection, the efficiency of infection, area under the disease progress curve (AUDPC), the length of the latency period, the sporulation and average size of the lesions, the level of resistance (expressed according to the scale OIV 453) and the length of the latency period are analyzed. In general, some varieties showed a good resistance to artificial downy mildew infections (low incidence and low or no sporulation). UD 72-096 was infected but was able to significantly hinder sporulation. These data explain, for the most part, what has been observed in the field, also making it possible to clarify the mechanisms of self-defence specific to the new genotypes.

In both years, at harvest time, the presence of botrytis on the harvested clusters was quantified and shelf-life tests were carried out in a controlled environment in the post-harvest period. In these tests, the Ervi bunches were significantly less susceptible than Barbera, while the resistant varieties apparently showed no significant resistance to botrytis. However, the 2019 trial showed results that were against the trend of the most recent studies on the subject, since only the traditional varieties showed the presence of latent infections, i.e. infections that occurred in the ovary during the flowering period, which however remained in a dormant state until the environmental conditions became favourable for the development of the fungus during the last phases of ripening of the berry. If this aspect were confirmed for the latest generation varieties, significantly innovative scenarios could also be opened for the early management of bunch rot on these varieties.

The data obtained will be used to implement the platform vine.net provided by Horta srl, calibrating the phenological model and the models of disease (powdery mildew and downy mildew). The Decision Support System (DSS) vine.net will be used to assess the impact on the effectiveness and cost of defense for resistant varieties. An assessment will also be made of the adaptability of the new hybrids to the soil and climate conditions of Piacenza. 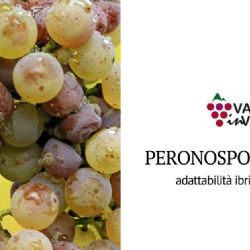